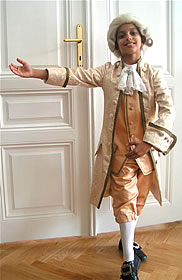 On the occasion of the 250th birthday of the world-renown genius Wolfgang Amadeus Mozart, we invite you to take a musical journey to the imperial city of Vienna. We find ourselves in the year 1762 in the elaborate Spiegelsaal (Mirror room) of the Schoenbrunn Palace. Empress Maria Theresia is listening to the impressive piano playing of the six-year-old Wolfgang Amadeus Mozart. After his concert, little "Wolferl", as he is lovingly called, bows politely to the empress and her family then climbs
confidently onto the lap of the enthusiastic monarch and hugs and kisses her affectionately.
Overnight, the child prodigy from Salzburg, a little boy wearing a wig, becomes the talk of the town and is, from then on, a popular and welcome guest at the celebrations of the nobility.
In the years to follow, W.A. Mozart travels all across Europe, as Leopold Mozart, a strict father and music teacher, proves himself to be a particularly successful artistic manager for the boy. W.A. Mozart, with his astonishing abilities soon surpasses his father: he begins to play the piano at the age of three, his first compositions follow a year later. His first public performance took place on September 1st, 1761. It was followed by the publication of his first opera in 1765 and his appointment as "Konzertmeister" of the Salzburg court at the age of 13. In the course of his short but intense life, he gave the world an abundance of unique compositions the genius of which remains unsurpassed to this day.
During his approximately 15 minute long concert, our young Mozart in an historically accurate costume tries to convey the incomparable atmosphere which the imperial family surrounding Maria Theresia must have felt back then at the legendary performance of the six year old "Wolferl" in Schoenbrunn Palace. Lean back and enjoy the cheerful mood as our young Mozart with his youthful charm conquers the hearts of the guests.